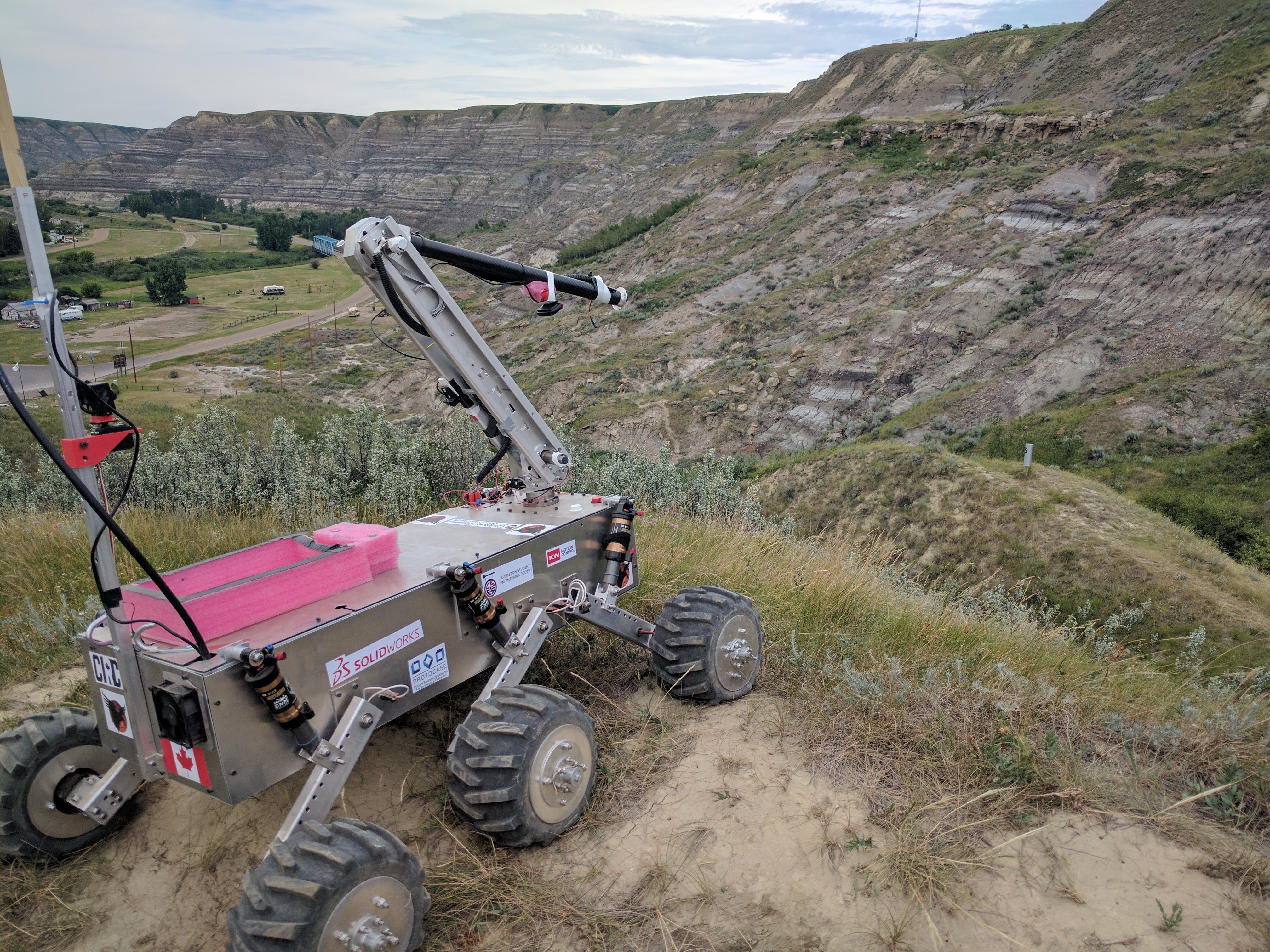 Sparky looks out over the Drumheller landscape, at the Canadian International Rover Challenge in 2017

I was a founding member of the Carleton Planetary Robotics Team, a member for 5 years, and the leader of the electronics team for 2 years. During my tenure, the team built three rovers, attended four competitions in three countries, and took home two podium finishes. I now serve as an advisor to the team, providing guidance on both team management and technical decisions.

In the time since the team’s founding, CPRT has grown from a few space-interested students to more than 50 members under a matrix management system, with dedicated members to business activites. CPRT is on of the largest engineering teams at Carleton, and is the most interdisciplinary team within the faculty.

Our first rover was nicknamed H3, and competed in Machester, UK at the United Kingdom University Rover challenge. The rover drove reliably and arm performed well, but was plagued by communications issues, as the competition was held in an urban location with a saturated 2.4GHz spectrum. Despite the issues we came away with a 4th place finish.

Our second rover was named Waldo, and it was faster, stronger, and more agile than H3. A new arm provided 5kg of lifting ability at a full extension of 1.5 meters. Sparky could drive on flat ground at 2m/s, and tackle a 40 degree incline at speed. We brought Sparky to the first every Canadian International Rover Challenge, and took second place, falling short of first by a fraction of a point.

The third rover, and the last one I was involved in design for, was named Waldo. Waldo brought custom-designed aluminum wheels and new motors for a new top speed of 4m/s (15km/hr) making it the fastest rover at the CIRC. The same reliable arm was improved with a 3 finger claw that supported infinite rotation, allowing the rover to use screwdrivers effectively. And Sparky’s 2.4 GHz communications system was swapped out for a 900MHz based one, which provided a full-data rate link even behind large obstacles (we tested through buildings and bridges) at 1km of distance.

The team travelled to the University Rover Challenge in Utah, taking 24th place out of 96 competitors, and again the the Canadian International Rover Challenge, earning a 3rd place finish amongst a pool of competitors that now spanned four countries.

I’m no longer involved in day-to-day work at CPRT, but their website will include details of future rovers, events, and competitions. Because CPRT was such a valuable part of my education, I’ve transitioned into organizing the Canadian International Rover Challenge, to help future students have the same learning opportunities I did.